Summer is a busy thing...

We were invited by Make-A-Wish Foundation to attend their 25th Birthday Celebration at Miller Park in Milwaukee. We decided that was a function we would attend. We were going to have to be in Wisconsin Dells Friday and Saturday anyway for a powerlifting meet (i'll post about that in a different post), so we figured we would just swing over to Milwaukee on Sunday and attend.

It was crowded and super busy, but lots and lots of fun. We attended with our good friends, the Halmstad's.

I'll walk you through the memories.....

First, is Stefani's name tag with the special sticker indicating that she is a Wish Child (2005). 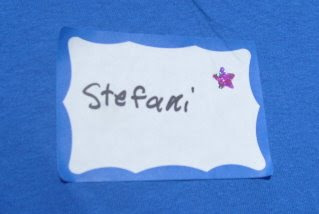 Next is a picture of her ticket for the game. (Stef, you need to paint your nails!)

Here is Stef and Teo during the game. We were all sitting in direct sunlight the whole game, so we were pretty cooked. Yeah...my daughter, the diva and my son, the stud. 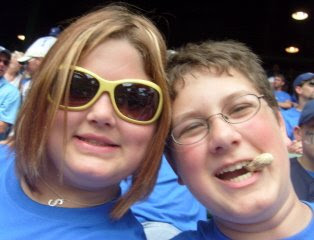 This is me and Tony. In case you can't see it...I'm lobster red. My face got completely fried (except half of my forehead, because I have bangs). Forgot to put sunscreen on the whole thing. I sprayed my feet, though. Priorities. 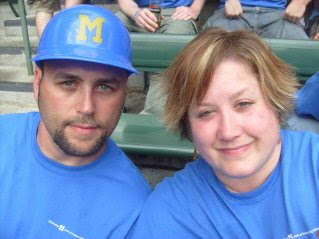 At the Make-A-Wish party that we attended for 2-1/2 hours before the game, we got to meet a bunch of the Star Wars characters. First up is Darth Maul (sp?). This guy looked so much like the original character, it was unreal! lol 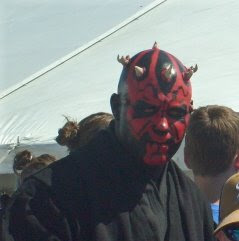 Here we are with Darth Vader. (Oh, the sun was so bright...the part in my hair got burned.) When we walked up to Darth I said "You have got to be hot in that thing." He promptly hit his "breathing like Darth Vader" button. I took that to mean, "Yes, very hot".

Heidi and Taylor at the game. Taylor eventually cooled off by dunking her head in the bathroom sink. 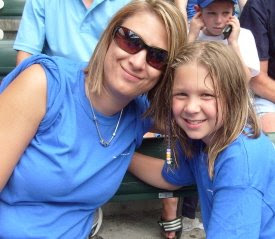 Jay and Brad. Brad was a trooper, he never showed any wear or tear. 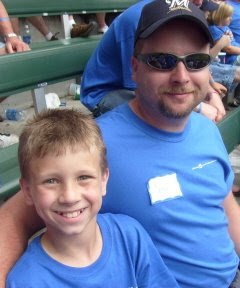 Back at the Make-A-Wish party, we got to see Mickey Mouse for about 5 minutes. 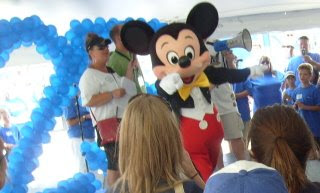 More Star Wars characters. Later when R2-D2's remote operator was walking him back to the truck, I happened to be walking past him and for about two seconds I almost said "Oh my God, R2-D2, I just love you"....then reality slapped me and I told the handler about my almost faux-pas...and he said "You wouldn't believe the amount of people that do that." Thank the Lord, I'm not the only crazy fool out there. The Tie-Fighter Pilot actually made the "Tie-Fighter Scream" sound. It was cool. lol 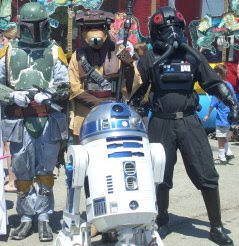 When our family took a picture with the "Resistance", Tony was wearing his Milwaukee Brewers helmet, circa 1980's. Chewbacca took it off of Tony's head and wore it for the picture.

Then Chewy was kind enough to put it back on for Tony.

This was the score when we finally had had enough. The hitting wasn't very exciting. If anything fouled, it fouled to right field, or right behind home plate. It was so distracting, because the people in the five rows in front of us were up and down and up and down and up and down....the whole game. We kept missing the exciting stuff because people were usually standing in the way. A bottle of water was $4 and I just couldn't afford to keep the kids hydrated anymore. So we left. 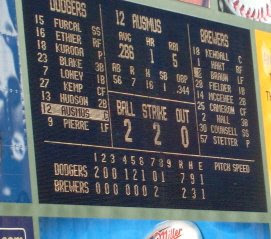 After the game we headed back home, stopping in Waukesha at Jimmy's Grotto for a Ponza Rotta. Oh hallelujah, they tasted just as good as they did 14 years ago. :)
at July 13, 2009
Email ThisBlogThis!Share to TwitterShare to FacebookShare to Pinterest
Labels: brewers, make a wish