When Cold Weather Makes You Fat.

Hello again.
Friday morning, the first morning of "The Rummage Sale", dawned cloudy and chilly. I was up and showered by 6 something. The sale wasn't set to begin until 7. HA! People were there at 6:15! (it was worth it. They pulled in close to $2500)

I wore a hoodie sweatshirt. When I used to live here, that would have been enough. But, as John Pinette is fond of saying, "Nay, Nay!", that was a Nay, Nay for me. I ended up vibrating from the inside out and wrapping a blanket around me. Which was good for a good portion of the time I spent in the garage. However, every time I stood up to walk...I started vibrating again.

My mother had asked me early on in the day if I could please make some banana bread with the nearly black bananas on the counter. Of course, I said yes. Somehow, and my recollection gets a little fuzzy here, that turned into a chocolate 4-layer delight, a cherry crisp, a cherry crumble pie AND said banana bread.

I'm not entirely sure what time I went inside to do all of this. My aunt helped out with the 4-layer delight. I know at 1 something I was only done with the banana bread batter and I had to kick my mother out who trotted into the kitchen to suddenly prepare a ham for supper. Dude!! Their kitchen is not really made for more than one person at a time if anyone plans to move and get things done.

I am standing there preparing banana bread batter from a Better Homes and Gardens recipe on my phone (oh thank you, God, for iPhones!) and suddenly realized that Hey! This recipe makes two loaves!! Panic ensued. My mom currently has two bread pans, I needed four. Banana bread takes an hour to bake! Thankfully, my mom had a four mini-loaf stone from Pampered Chef that was rediscovered during 'The Purge'. (btw, my mom is having her first home party on Thursday! Let me know if you need anything!) So, moving right along, I got my breads banged out.

Then I moved on to the cherry crumble pie crust. That had to bake and cool first. The cherry crisp was easy. I just lightly greased a glass pan, schlopped two cans of cherry filling into it, made a 'crisp' topping w/oatmeal, brown sugar, flour and butter and baked her up. Oh Lordy. Good stuff.

I made the crumble pie from a mish-mash of recipes. Pie crust from BHG cookbook (from like 1968), cherry pie filling from the store, almond crumble topping from smittenkitchen.com (LOVE her stuff!! I'm totally buying her cookbook!). The crumble turned out Uh-Mazing!! Cinnamony, almondy, crumbly.....

I've informed my daughter that these are keepers and going in the recipe box when I get home. I will make these desserts again. Oh yes. I will.

**I promise to post recipes and/or links to recipes as soon as I can! 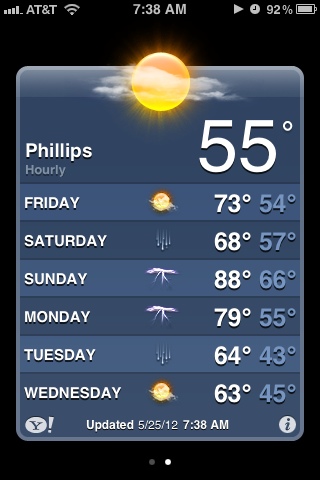 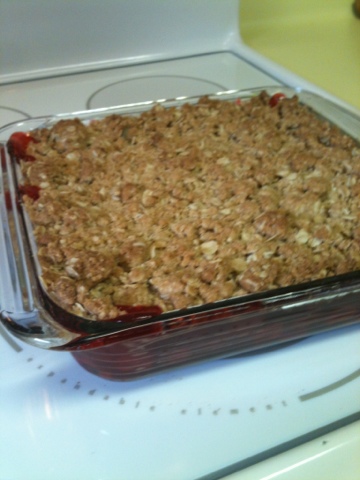 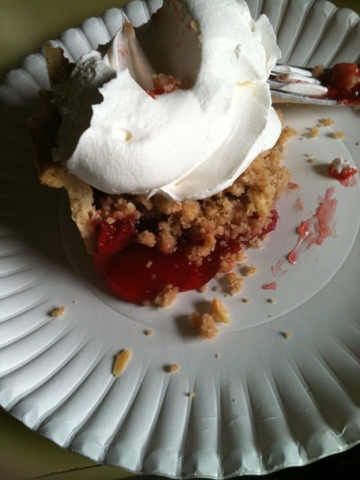 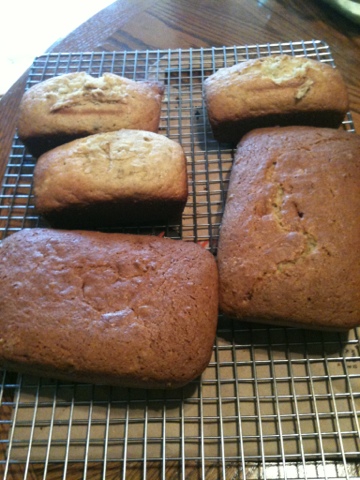 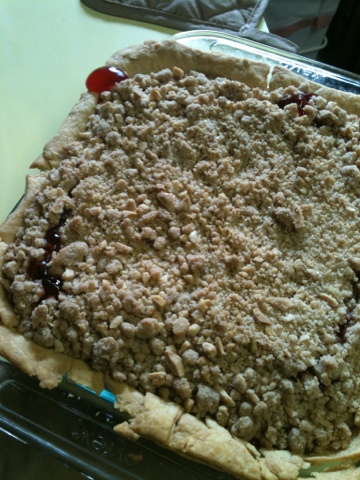 at May 27, 2012
Email ThisBlogThis!Share to TwitterShare to FacebookShare to Pinterest
Labels: afghan