Sow When You Can

Then it was time to test for their yellow belts. I happened to be in Wisconsin for three weeks, so Stefani had to stand in for me with taking pictures, etc. While at the testing with the boys, she had the chance to meet Charles' Charlie. By that, I mean, Charles has a little boy named Charlie. She fell in love. He, apparently, was also testing in the Pee Wee classes for his yellow belt and when they would call out his name "Charles..something, something..the Third"...he would run over into position and say "Yes, Suw", as Charlie is only 4. She described him to me "big blue eyes, blond hair, chubby cheeks, just the cutest little boy EVER"...teenagers have such expressive ways of describing things. I just knew that I had to meet this little boy. So as soon as I got back from Wisconsin, we all went to class with Tony and Teo. My inlaws were down and wanted to see them in class too, so they came along. Everyone got to meet Charlie that night.....and we all fell in love. Stefani and I discussed it and decided that we would start going on Tues and Thurs nights to help watch Charlie so Charles could attend his adult class without having to worry about Charlie and whether or not he was behaving.

I have learned so much about Charlie. I have learned he loves the color green. He has a sister Cate who is 1. His mommy has another baby in her tummy and that baby is 1. If it's a boy his name will be Ben, but if it's a girl, her name will be Chelly...with a C. He has an Ami and Apa, whom he misses very much. When daddy was on a loooooooooooonnnnnggggg Army trip he saw them every day. But, since daddy came back and they came down here, he has only seen them once (insert downcast eyelids and sad expression of a 4-year-old here). When he is excited, his blue eyes sparkle and his smile gets big with dimples and his voice gets louder and louder and when you say "shhh, Charlie, not too loud"...he keeps talking but he gets down in a conspiratorial huddle and whispers really loud.

He loves his Nintendo DS and plays the Legend of Zelda. I, who knew nothing about it other than it is a very popular game, asked him..."So is that Zelda?" He just kept right on pushing buttons and said "No...that's Link". So I asked him "Link?" and he responded with an exasperated sigh "Yes, Link. He saves the Princess."....Ahh, yes...saves the Princess...why didn't I know that? lol. He, also, LOVES comic book characters and carries around a little backpack with Spiderman on the front and the inside full of little figurines. And he will tell you all about them. His information database could rival my 15 year old's.....seriously. Charlie loves to talk.

Last week, we shared some sugar-free mints. Apparently, they were "wishes". He would wish on each one and sit there and lick it. You know how small a sugar-free mint is...... He was very sticky. His daddy didn't realize that the mint he was licking on at the end of class was not the same one he was licking on at the beginning of class, so he sort of barked at him and said: "either put those in your mouth or throw them out". Later Charles told me that Charlie said to him in the car.."You made me eat my wishes."....and Charles, after finding out that the mints were wishes that Charlie was relating to his Disney experience, felt so bad. LOL. When he told me this, I had to relieve his misery. I told him "don't feel too badly. he had about 20 wishes that night!" After that, he felt better. :-)

Turns out Charles in in the Army and he has been stationed in Pensacola for a very short time. Apparently, shorter than even he was expecting. What was supposed to be a longer stay turns into a "moving on" in August. He is being stationed in Georgia now. I can see that living in Pensacola is going to have its painful times. Just when you get to know someone that you would like to continue to have in your life, they have to go. So.....we will sow friendship while we can.

Little kids give me an opportunity to break out old patterns that I love and try new patterns out. I decided to make Charlie and Cate some toys. Cate is, actually, almost 2. Her birthday is in August or September and so is Charlie's.

I decided to make Cate a doll I've made a hundred times, at least. She's a sturdy thing that will last through all the love a 2 year old can dish out. Her pattern can be found in an old Annie's Crochet Newsletter. It's the May-June 1989, No. 39 issue. Here is the link to one I found on Amazon. The pattern is called "Beth and Baby". I have tweaked it a little to suit my style and I make different clothes. But, the pattern is worth the money to buy the book. At one point in my life, I misplaced my original copy of this book. I went on a mad hunt to find it again, paid too much on Ebay for a replacement issue....then I found the original. :-/ 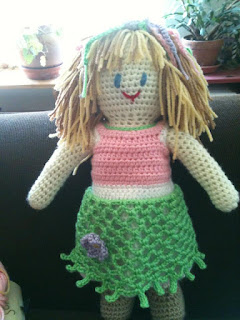 For Charlie, I made a "Link" doll. Here is the free pattern for this one. This is a beautiful set. Complete with accessories and extra characters. I just made Link and his weapons. That was enough. The pattern turns out well, but unless you are well versed in making amigurumi....it's very hard to follow and from time to time is missing chunks of information. But, if you want to muscle through...it's a beautiful set. And it's worth clicking on the link just to go look at the set made by the designer. She did a beautiful job. :) 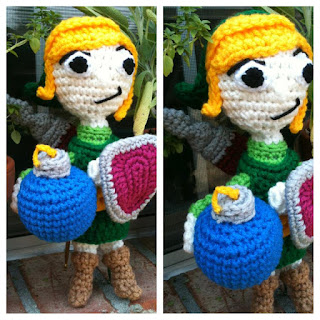 at June 30, 2012
Email ThisBlogThis!Share to TwitterShare to FacebookShare to Pinterest
Labels: be a friend no matter what, crochet doll pattern, crochet link pattern, sow where you can, use your talents to be a blessing, Zelda crochet