Social Media for the Tech Challenged Entrepreneur:
Why Use Hashtags?

Do you ever feel like a dinosaur when it comes to social media and all of its quirks and uses? I know I do. I have always been a step ahead of my parents who are in their 70's when it comes to social media. I mean, I was even ahead of a few of the younger generation. I was on Facebook back in 2006 or 7 when it was still a really new platform. (But, they have far surpassed me since then.)

Then came all the other platforms like Twitter, and Instagram, and Pinterest, and Snapchat, etc. Talk about overwhelming! At the time I wasn't interested in knowing about them or learning about them, and now I'm playing catch up! Now I want to use it and it's like learning to speak a new language. Dios Mio!

So, if you're anything like me, we will learn this together! This week's "Social Media for the Tech Challenged" segment is going to be about those silly little hashtags. I say silly because it's become almost ridiculous in today's society. EVERYTHING is about the hashtag...even when it shouldn't be. Haha!! Take, for instance, this skit by Jimmy Fallon and Justin Timberlake:

Ok, so is there a real reason for the hashtag? Yes, there actually is! Hashtags are meant as a link to gather ideas together in one easy to find location. However, hashtags have different uses across different platforms. I'm going to discuss two of them, only because I understand them the best; Facebook and Instagram.

Let's start with Facebook. Using hashtags on Facebook is still a relatively new thing, although I'm sure you have seen them. They are becoming more popular, but I'm not sure that some of the people looking at them know why they are there. I know I always thought it was just a thing that the "kids did." But, if you click on one of those hashtags Facebook will take you to a place where multiple articles and posts including that hashtag are gathered together for your searching pleasure. Hashtags make your post searchable on Facebook! If you are a business or a brand on Facebook it's not a bad idea to incorporate select hashtags in your posts.

Reasons to use hashtags on Facebook; First, to conserve space. There is actually a sweet spot in the number of characters you use in your posts on Facebook. Their ideal character limit is between 40 and 80...even less than Twitter! Second, to make your post searchable on a platform that is not easy to "search." There are two ways to search for hashtags on Facebook. Using the actual hashtag itself, for example, #crochet or use this: Facebook.com/hashtag/crochet. So, when you are creating your Facebook post- think about the most important things you want to say about your product, and then maybe think about using a hashtag or two.

So, what do hashtags do on Instagram? Simply put, Instagram is a hashtags playground. Instagram is just a photo blog platform used best through an app on your phone, and hashtags are used for everything. For whatever reason, those hashtags are like a siren song. People love them! Some people tell a whole story using them. Sometimes a hashtag will give a picture its entire context. They do the same thing as Facebook, ie giving you engagement on your post either through clicking or commenting. Instagram uses hashtags to organize the photos and videos according to subject content.

There are a lot of people who use the hashtags on Instagram to find accounts that post what they are interested in. For instance, I use the hashtags #crochetersofinstagram and #crochetlove a lot on my pictures. I have included a couple of pictures as a reference so you can see what happens when you click on the hashtags- 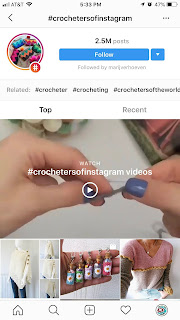 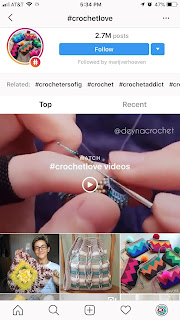 And if you notice, you can actually follow those hashtags. People use them to grow their accounts all of the time. I, personally, noticed an increase in engagement on my posts when I finally realized that hashtags weren't just some silly afterthought. Hashtags are another form of SEO for your account! It may only be used within the social media platform itself, but it is still another useful tool that we should be using to increase our engagement and followers. After all, you need to have followers if you plan to have customers, right?

Anyway, I hope this post was informative for you. I hope it helps you to step up your hashtag game. I know sometimes it's easy to be afraid of what we don't understand. But, I promise you, you won't blow anything up if you hit a wrong button! :)

Go forth and conquer!!

All my love,
Biz