Most of you know that Stefani, my daughter, is a powerlifter. If I had more time, I would post about each of her meets this year. You may not want to read it, but I like to brag. :) However, I do NOT have that much time on my hands. So I will just share with you the best and hardest fought meet of her season. The USAPL (United States Amateur Powerlifting) National High School Powerlifting Meet was held in Wisconsin Dells this year at the Kalahari Resort. It was an amazing weekend!

Stefani had her work cut out for her. As much in her mind as anything. We found out just before the meet that there was going to be a girl in her weight class at JV that we didn't think should be allowed to lift there due to her age. We made this "assumption" based on the rules that the USAPL had listed for the competition. Apparently we were wrong and this girl was allowed to compete against Stef. C'est la vie! She had to get herself mentally prepared for this. The other things she had to over come were the fact that she had decided to lift in the bench competition without the assistance of a bench shirt. It can increase the bench by 50-100 lbs depending on how well you let the "tool" work for you. She never got comfortable with it in her practices and felt overwhelmed by the possibility of having to compete with it on. So she made the choice to lift "raw". The last thing to overcome was the fact that when her weight class started...she missed her first squat on a technicality. This can be a hard thing to come back from. If you bomb all three squats, you scratch on the whole competition and you have just come all that way for nothing.

She came back from all of the things she had to overcome with shining colors! She ended up taking first and is the 198+ USAPL JV NATIONAL CHAMP! I couldn't be more proud of her!
The thing that made me the proudest was something she told me after she had won. She was in the back waiting to see what the last two girls were going to do. If either of them got their last deadlift, they could take first. And Stef would end up in either second or third. She prayed and said "God, if this is what you want for me, then you'll make it happen. If not, then I'm ok with second. I'm really ok with it." She felt as though she had done the very best she could and gave it over to God. I hate to say that God made a team win at football over another team, or anything like that. But, I will say that my daughter had favor. The second to last lifter was able to increase her lift in the last minute to a weight she could not lift in hopes of taking over...and missed it. The last lifter wanted to increase her lift in the last minute to a weight she knew she could get...and would have won...but the head judge had called "bar loaded"...and she couldn't get her lift increased. Luck or Favor of God? Call it what you want...I call it favor.

1st Pic: Stefani, Cassy, Morgan and Tyler. The four freshman that made to it National's from our school. The girl's all took the Championship in their respective weight classes and Tyler pulled out a fourth, when by all intents and purposes should have been on the bottom of the list. 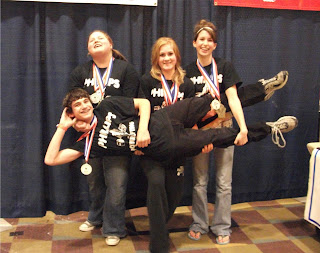 2nd Pic: Stefani seated on the National Guard Orange County Chopper. My cousin, Isaiah, is a recruiter for the National Guards. He, also, helps coach a powerlifting team in Mauston. He helped with the National Meet and requested the Chopper to have at the meet. All of the Champions had their picture taken on the bike. 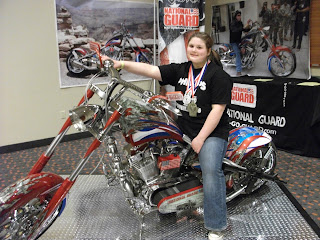 3rd Pic: The family. Teo, Tony, Stefani and Me. Tony is an assistant coach on Stef's lifting team. 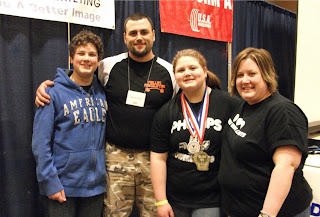 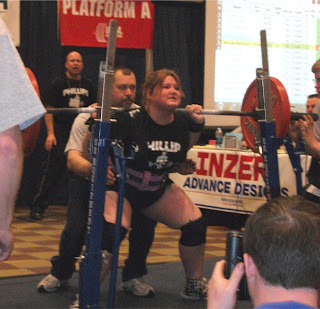 5th Pic: Stefani's second bench. I think it's 125lbs. Can't remember the kilos. She missed her last bench for 132 lbs. She did lift 130 at State. The most amazing thing to me is that Stefani lifted raw and almost out benched the other girls that wore bench shirts. Next year, she will be wearing a bench shirt and she is going to ROCK!! When she does use it, she benches somewhere around 180-ish. 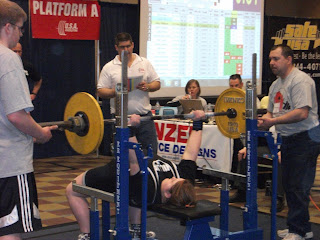 6th Pic: Stef's second deadlift. I got a really bad pic of her last deadlift that was 308.6. I was cheering so much, I forgot to take the picture of her lockout. I think this lift is around 300-ish lbs. 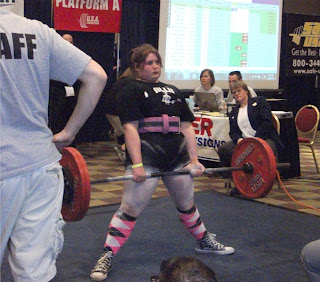 7th Pic: Stefi on the podium. :) I couldn't have been happier for her. She worked SO HARD!! 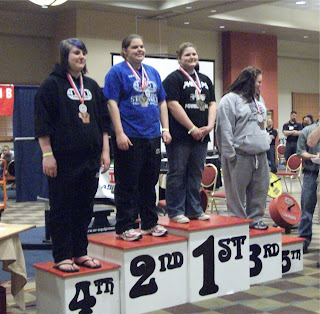 Next time, I'll be better about posting about her lifting competitions. She and her brother and Daddy are back up in the gym tonight to start her summer training schedule. It will be Teo's first season in powerlifting next year. Tony wants to get him over the 'whining' that will occur as he learns how to squat and deadlift, etc. And Stefani has the goal of seriously increasing her raw bench, so that when she does wear her bench shirt she will blow everyone away. She wants to work on her squat too. She is going to have a title to defend next year in Corpus Christi, Tx. :)
at April 12, 2010
Email ThisBlogThis!Share to TwitterShare to FacebookShare to Pinterest
Labels: powerlifting, usapl