The first of the striped mittens is completed. Almost everyone in my circle of people has tried it on. And almost every one, to a person, has said "Oh! It fits!"...like there was some question that it would...? Come on, people!

My daughter, being the high-maintenance gift receiver that she is, was irritated that the thumb was not black. When we talked about the order of the finger/thumb color repeats, we had discussed the thumb being black. Well, in all of my finger knitting...I forgot. I was going to do them blue when I had originally started them, and when it came time to do them..I just picked up the blue without another thought. By the time she realized the thumb was blue, I was about 5 or 6 rows into the thumb and I was not knitting them back. There is much disappointment in that blue thumb. It's an unexplainable disappointment. I have, yet again, failed her somehow. 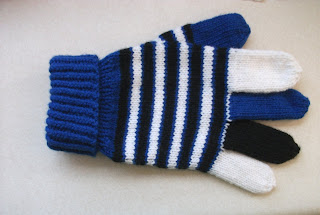 Me and my ever-present pattern book just keep plugging along. I will finish her second mitten (which I offered to alter the color progression of the fingers and have the thumb be black...but no...they won't match, then) and wipe my hands of her neediness for a bit. It will be good to be done with this pair. 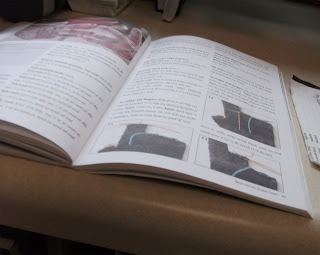 Then, it is on to my husband's black pair. They will be a wool blend to keep his previously frost bitten fingers warm.
And now, a personal moment: I have hit a whole new level of fatigue. I decided last Friday night, while my husband and daughter were at football games and my son was busy playing video games, that I would can. I started around 6 something and quit around 11. I was able to get cranberry sauce, spicy cranberry salsa, traditional salsa and caramel-apple jam canned. However, by the time I was done canning, I was keyed up. Couldn't even think about going to bed. All I wanted to do was knit and relax. Then A Few Good Men came on TBS and I just had to watch it! I mean, it was almost language free! I love that movie. So, I was up till 2am. yay. My plans for Saturday were to get up and go scrapbooking. I thought "I'll just sleep in and go when I wake up". Lucky me, I was up at 7:15. Plenty of time to get ready for scrapbooking! Saturday went fast, but I was up late again. Sunday dawned bright and EARLY....and I hauled my cookies out of bed for church. But, no nap for me during football cuz we had friends come over for the day. It was a nice time, but I spent alot of time yawning. Now, I am at the end of an extremely busy day at work. The phone rang non-stop with the temps in the 30's first thing in the morning. Now, I face an hour trip out of town to go grocery shopping and i. am. tired.
Tonight, I go to bed early. No excuses. Well, after Dancing with the Stars......
at October 04, 2010
Email ThisBlogThis!Share to TwitterShare to FacebookShare to Pinterest