Update: 2/4/21
My Hero Academia Inspiration Sampler is now available on my website, Ravelry, and Etsy.

It's been a couple of years since I last designed a blanket based on something in pop culture. This time happens to be a blanket about a Manga/Anime series called My Hero Academia. 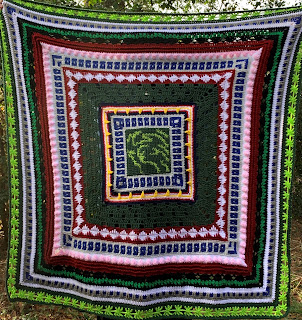 My son actually asked me to make this blanket for him in 2018. I kept letting other things distract me, and since I do so much research into the characters I had a really hard time landing on the stitches I wanted to use to represent each character. Once I got the center section of Deku done, I just got stuck and it sat there for another year. This last Christmas season I decided it was time to apply myself and get this baby done. 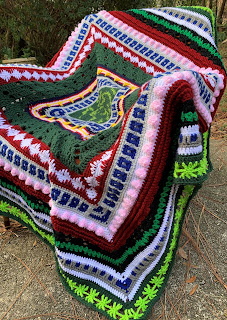 The characters represented, in order, are: Deku, All Might, Bakugo, Todoroki, Uraraka, Kirishime, Tsuyu, and Iida. These were the characters that Teo most wanted represented in his blanket. Plus, there are a few rows representing the windows of the school they go to in the series. I finished off the edge with a row of lime-green power bursts for Deku again. Every time I talk to him about the power bursts he re-educates me about how Deku's power doesn't come out of him in power bursts, it builds up and then comes out in movements? Do I have that right?

I'm definitely not up to speed on how all of this stuff works, even though he explains it to me all the time. The pattern is currently in testing and I'm hoping to have it published by some time in February. My testers are having fun with the pattern, and say that the stitches are doing a great job at representing each character. Hopefully, you'll have just as much fun with it! 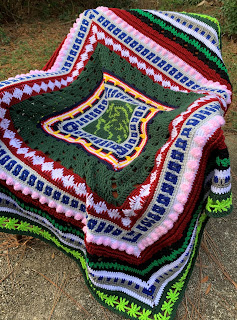