So I was at this craft fair this weekend. And there was this little woman sitting and demonstrating spinning (a craft I NEVER intend to learn)...and she had wool.

Baskets and baskets of wool.

Oh yes. I had to touch it. Actually I started love affairs with three particulars skeins that decided to come home with me.

If I had been intelligent I would have taken pictures of them before they were dismantled and rolled....but ya know how the fable goes....after marriage ya lose some of your fluffy lusciousness.(ya know, cuz I was having a love affair with them...and they came home with me....WHAT?!? did ya think I was easy??? )haha..sick humor! Like my husband says when I don't understand him...'you're in the car, now ride along'...kind of like..'keep up with me, here'....
Nevermind.

I had to have them in balls before I could start socks...so here they are. Burgundy one is just Llama, the other two are llama and silk. 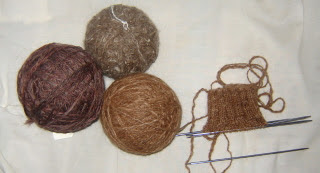 at September 12, 2007
Email ThisBlogThis!Share to TwitterShare to FacebookShare to Pinterest